The Siberian Husky breed comes from a longstanding tradition of working dogs. The ancestors of the Siberian Husky breed are believed to have been developed by the nomadic Northeast Asian (Siberian) Chukchi tribes. While the heavy draft dogs were primarily used around the turn of the 19th century, the Chukchi people became known for their use of light-weight dogs. These dogs were used to routinely travel long-distances at a fairly quick pace, since the Chukchi people’s land-locked lives depended on this travel to the sea for food and supplies.

It wasn’t until the early 1900s that the “Siberian Chukchi” dogs were first introduced to Alaska via the Bering Strait. There, people quickly realized that the dogs’ talents were not those of sprinters or freight dogs. Instead, the d 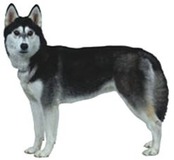 ogs were recognized as endurance machines capable of pulling light loads over vast distances. From that point on, the Siberian Husky grew in popularity and number.

In 1925, ancestors of today’s Siberian Huskies and Seppala Siberian sled dogs played a critical role in saving the lives of thousands of Alaskan children and adults during a fatal diphtheria epidemic. Known as the “Great Race of Mercy,” three brave teams of mushers and sled dogs relayed back and forth from Nome to Anchorage, covering over 1200 miles round trip, bringing serum back to ailing children and saving many lives in the process.

Head: Mesaticephalic skull-type, moderate in size, wedge-shaped, and in proportion to the rest of the body. The skull is moderately broad (when measured across the top in front of the ears), being as wide as it is long (from stop to occiput). When viewed from the side, it may appear slightly arched from the ears to the brow. The head exhibits smooth muscle to denote strength and power. It is never finely chiseled, nor clumsy. The head is clean-cut without excess skin or wrinkle.

Eyes: Moderate in size, oval to almond in shape, and set in a slightly oblique manner. They may be of any color, or combination of colors, according to the coat. The eye rims are well-fitted and well-pigmented. Darkly pigmented eye rims are important in this breed, since they reduce snow glare. The eyes are never bulging or rounded. There should be sufficient bone in the surrounding orbital sockets to protect the eyes.

Muzzle: The muzzle is strongly developed, moderate in length, full, and broad. The plane, or bridge of the muzzle, is straight. Upper and lower jaws have good bone substance and are equal in length, appearing strong and well-developed. It tapers slightly from the strong and full base to the nose. It is never overly long, short, narrow, broad, snipy, or weak.

Nose: The nose is well-pigmented and black, or self-colored according to the coat. “Snow noses” (faded noses) are acceptable. The nostrils are well-opened.

Neck: Moderate length to allow for proud head carriage and strongly muscled with an arch. The neck tapers smoothly from the deeper and broader body toward the head. The neck is clean-cut, without excess skin, throatiness, or dewlap.

Chest: Deep and broad, but never wider than deep. The brisket extends to the point of the elbows.

Body: The body has sufficient substance with an excellent range of motion to allow for optimum endurance. It is never heavy or racy. The back is straight, strong, and supple from withers to croup. It is of a moderate length and never overly short and cobby, or excessively long and swayed. The body narrows at the taut, lean loin from the ribcage to the pelvis. Width at forequarters is approximately equal to the width at the hindquarters.

Feet: Oval to round and compact, with well-arched toes and tough pads.

Tail: The tail is set on just below the level of the topline on the sloped croup. It is thick at the base and tapering toward the tip. The tail is carried in accordance with the dog’s mood and energy level, but never tucked. When alerted, the tail may be carried over the back in a graceful sickle, but never curled up over the back to the side. It should never lie flat across the back. A natural, neutral tail position is normal when the dog is in repose. The tail should never be tightly curled, snapped, too high, too low, nor abundantly plumed. The tail is of a medium length, with the tip of the last vertebrae extending to the hock joints when held down.

Movement: The Siberian Husky’s movement is one of the most important characteristics of the breed. It should be smooth, effortless, and efficient. The gait should be free of any lameness or poor coordination, as it is a movement that should be repeated for miles up on end. The characteristics of healthy structure are evident: when moving away, the forelegs and rear pasterns should remain parallel to one another. When viewing movement from the front, the forelegs should remain parallel, with elbows and paws moving neither in nor out. From the rear, the back pads should be visible when the rear legs are extended. As speed increases, the forelimbs and hindlimbs will converge to the centerline of gravity. From the side, the topline should remain firm and level. Good reach of movement in the front allows the forepaw to extend out in a line with the nose. The width between the forefeet when extended should be approximately equal to the width between the hindfeet when extended, indicating balance, good reach, and good drive. Dogs that exhibit any sign of breathing or locomotive difficulty shall be disqualified from the show ring.

Temperament: The Siberian Husky is a true working dog, with a strong instinct to move. This instinct should be both exercised and curbed with obedience training. Because this dogs of this breed have been bred and raised to work as a “team” for thousands of years, they tend to be excellent for multi-dog families, being alert, gentle, and friendly while lacking the possessive tendencies of other breeds. Their friendly, outgoing nature and lack of suspicion with strangers also makes this breed a poor choice as a guard dog. Any unprovoked aggressive or fearful behavior toward people is incorrect for this breed.