This breed has been our passion since 2011. We are a small scale siberian husky breeder in the heart of the Pacific Northwest. It all started off when I took my first siberian puppy home in 2011. Turbo was the most energetic and playful puppy. From that point on, I knew that I wanted to be apart of something amazing. Something beautiful, something mysterious, and something challenging. This breed isn't for everyone. They are intelligent, cunning, loyal, and pack oriented. When bored, their destructive abilities can cause quite some damage. We, as the breeder, want to make sure that each family is prepared to take a puppy home.

Each litter is ethically and responsibly raised. Dams are given prenatal and postnatals to aid in their health and recovery. Puppies will stay with us for a minimum of 8 weeks until families can take them home. We require families to have their veterinarian examine their puppy within 24hrs of pickup, so appointments need to be scheduled ahead of time.

Our pack has their own custom made dog run and are exercised daily (weather permitted). We allow scheduled visitations and follow a strict biosecurity protocol. If you are interested in joining our Siberian family, we ask you to first fill out an application and tell us about yourself and family. We are happy to answer any questions. Feel free to follow us on Instagram and Facebook.

NO PUPPIES AVAILABLE AT THIS TIME : NEXT LITTER IS DUE DEC 2020 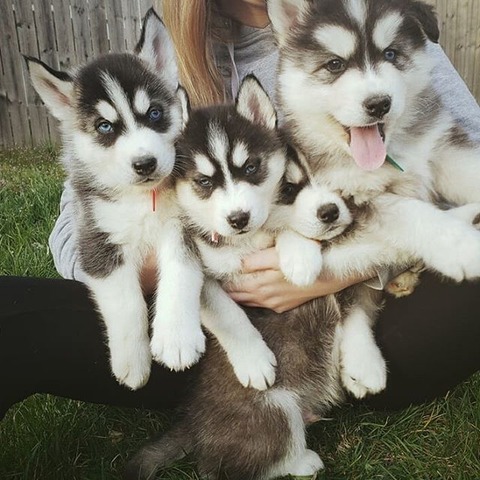 More than meets the eye

With its intense eyes, soulful howl, and seemingly endless endurance, the Siberian Husky has earned its reputation as a tough working breed. But there’s more than meets the eye, because the Siberian has a softer side— a sweet disposition and affectionate nature. It’s an uncommon combination, but this breed is anything but average.

The Siberian Husky was bred as a sled dog and developed by the Chukchi, an indigenous people of northeastern Asia who reside just north of the Bering Strait, where Russia and Alaska almost meet. In the early 1900s, the Chukchi dogs were brought to Alaska by a Russian fur trader named William Goosak, who used them to compete in sled races, including the All-Alaska Sweepstakes. Alaskan sled dog enthusiasts were so impressed with the Chukchi dogs they continued to develop the line, resulting in the breed we know today as the Siberian Husky.

The Siberian Huskies bred from the Chukchi canines worked as sled dogs in the far north and remained relatively unknown to the general public until the winter of 1925, when a diphtheria epidemic broke out in the remote town of Nome, Alaska. A serum was available, but with extreme ice-bound conditions complicating travel, getting it there seemed impossible. Enter the Siberian Huskies, who travelled by relay teams and brought the life-saving medicine to Nome. For their role in what was dubbed the Great Race of Mercy, Siberian Huskies became national heroes almost overnight.

Leonhard Seppala was one of the Nome relay’s lead drivers, having taken the harshest and longest leg of the journey. He brought his dogs on an American tour, showcasing the breed and proving in challenge after challenge the Siberian’s superiority as a sled dog. Seppala was instrumental in the development of the Siberian and in efforts to create a uniform breed standard. In 1938, the Siberian Husky Club of America (SHCA) was founded.

But what of today? Can a tough working breed also thrive as a family pet? In a word, yes. The Siberian was ranked by the AKC as the 16th most popular breed registered in 2011. Is it the right breed for you? You’ll have to consider the following.

First things first: these dogs need exercise. The Siberian’s natural instinct is to run. And run. And run! Providing a daily outlet for physical exercise is an absolute must and the SHCA strongly advises owners to fence in yards and keep their Siberians on leash or under control at all times.

Like most working breeds, the Siberian is likely to be happiest when he has a job to do. These dogs revel in activities like sledding and skijoring, but obedience training can also provide both physical and mental outlets—which brings us to the subject of training.

If you happen to be drawn to breeds that are intelligent but independent-minded, a Siberian might fit the bill. This is a spirited and naturally-inquisitive breed. Keen and alert, the Siberian is a thinker. Biddable and easy to train? Perhaps not, but with patience and a commitment to training you will be rewarded with a dog that is not only beautiful, but also well-mannered.

Quiet, they are not. Many know of the breed’s wolf-like howl, but the Siberian’s symphony of sounds extends to barks, yodels, and what some describe as a type of singing.

Grooming requirements, though a DIY affair, are also a consideration. The Siberian keeps himself fastidiously clean, but fur is a factor. The breed’s thick double coat requires weekly brushing. A thorough shedding will occur at least once a year.

The Siberian Husky is, in a word, special. He answers the call of the wild, but also serves as an affectionate companion. Who could ask for anything more?